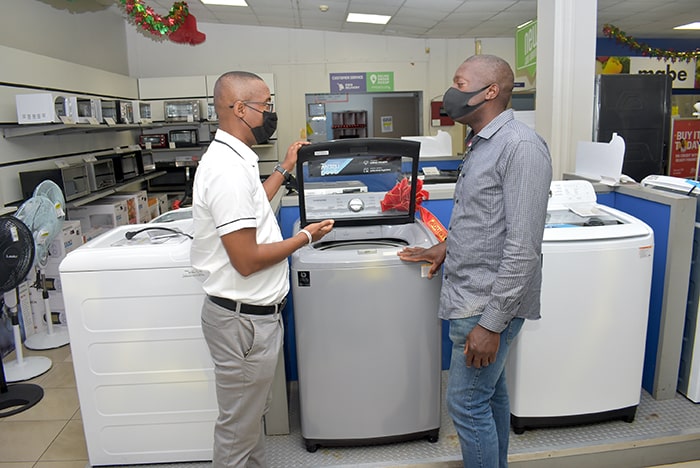 Farm worker, Marlon Wallace (right) receives a washing machine from Horace Hines, general manager, JN Money Services, owner of the JN Money brand during a handover at Courts, Mandeville, recently. Wallace was rewarded for his loyalty to JN Money while on the Seasonal Agricultural Workers Programme in Canada.

After eleven years, Marlon Wallace enjoys being a part of the Seasonal Agricultural Workers Programme, more popularly known as the “Farm Work Programme,” because of the independence it gives him, being able to provide for his family.

Mr Wallace has been going to a farm, in the town of Alma in Ontario, Canada, for the past eight years, where he picks apples. He enjoys his work immensely, and finds greater joy in being able to support himself and his loved ones.

“I have no regrets signing up for the programme,” he explained. “It has given me the means to provide for my family; and has helped me to be able to stand on my own, as well as meet my obligations, which gives me boundless joy.”

Prior to signing up for the programme, the resident of Comfort Hall, Manchester, worked as a mason and a farmer. However, he sometimes found it challenging to provide for his family.

“Being a mason and a farmer can be seasonal here in Jamaica,” he revealed. “There were months when things were good, but there were times when things were not that great. I needed to take care of my family; therefore, I approached my Member of Parliament, who recommended the Farm Work Programme. He gave me a ticket and I signed up and did the medical.”

For the first three years on the programme, Mr Wallace worked at a nursery. However, he later moved to an apple farm, where he has been for the past eight years.. While the nursery was a pleasant experience, I prefer the apples, because it keeps me fit and occupied also  I prefer to be moving about,” he stated.

Mr Wallace enjoys a game of dominoes, in his spare time on the programme. He admits that being away from his family for eight months is difficult, but he tries to stay connected as best as possible.

“It is challenging, especially in the early to middle months and you have to dig deep to survive. You call home to ensure that everyone is doing well, but it is still hard. When the time is winding down, you start to become homesick; however, you tell yourself that you are doing this to support yourself and family, hence that helps you to pull through.

Apart from calling home or communicating via social media, Mr Wallace also relies on JN Money to keep him connected with his family. The Balaclava Comprehensive High School past student, has been a customer of the remittance provider for as long as he can recall; and he enjoys his relationship with the company.

“They came to the farm a few years ago and the guys were signing up; therefore, I also signed up. In addition, I encourage my co-workers utilise the service to ensure that they send funds home to their families,” he related.

“They have really helped us to remain in touch with our families back home, and to be able to provide for them. The relationship has been good,” he affirmed.

As a reward for his loyalty, JN Money presented Mr Wallace with a washing machine from Courts, in Mandeville on December 2.

“I am happy to be receiving the gift from JN Money,” he said. “Mrs Fennel and I have a good relationship as well, and JN Money has been good to us. This gift will also be beneficial to my children.”

Mrs Paula Fennel, Business Development Manager, adds that Mr Wallace has been a pleasure to work with.

“Since he signed up with JN Money, Marlon has been quite responsible and has ensured that the funds being sent home to families in Jamaica are done promptly. He is pleasant and affable, and we enjoy the relationship we have with him and his colleagues,” she stated.

Mr Wallace adds that, in addition to being able to support his family, the experience has also enabled him to become more appreciative of the different personalities he works with.

“Sometimes, some of the guys may say or do things which may upset you; however, you learn that we are all different; and try your best to work with everyone, to maintain good relationships,” he affirmed.

Established in 1966, the Seasonal Agricultural Workers’ Programme has become a source of employment for many Jamaicans over the years. Last year, some 8,000 workers took part in the programme.