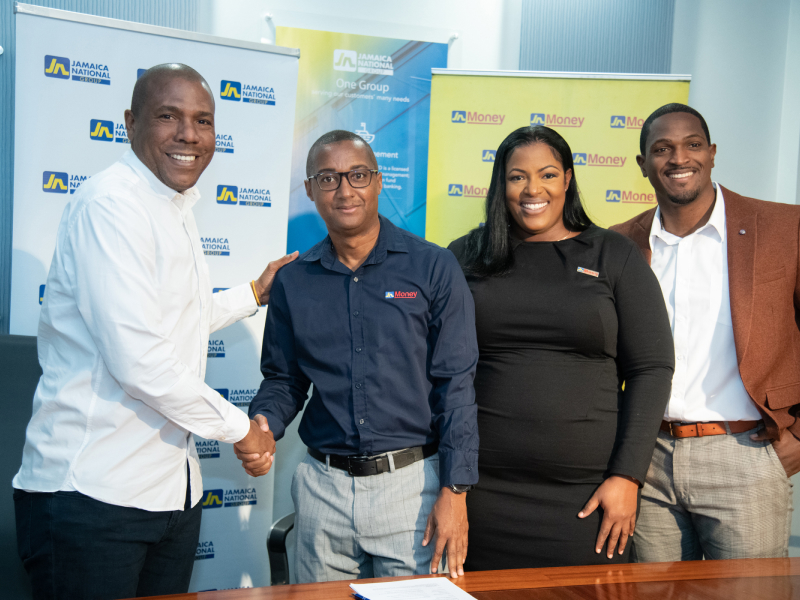 The Jamaican company- the largest Caribbean-owned remittance brand- this week (September 14) signed an agreement to provide technical expertise to Professional Football Jamaica Limited (PFJL), which manages the Jamaica Premier League (JPL), to assist with the upcoming season of JPL and support the structured growth of the PFJL over the next two years. The signing took place at the JN Financial Centre in New Kingston.

General manager of JNMS, Horace Hines, says JN Money, which is a member company of The Jamaica National Group, is a “grassroots community brand” which seeks to build Jamaica and serve improve the lives of Jamaicans wherever they are.

“Over the next two years, we are not only looking to work with the league on a wider basis, but we are also going to be working with a specific team that will be announced shortly. Through our sponsorship of that team, we want to also raise their professionalism,” he said. “We see the vision and if we can unearth talent within one of these teams that [could] be the next face of Jamaica’s football. If we can work with the league to help to develop the playing talent as well as the administrative talent, it would be a win-win for football in Jamaica.”

The arrangement with PFJL is valued at some $10 million and includes the temporary reassignment of JN Money’s diaspora and network coordinator, Owen Hill, to take up the position of Chief Executive Officer of PFJL. Mr Hill is a proven business professional and is a well-known football commentator and a former captain of The University of the West Indies football team.

Mr Hines revealed that JN Money will also be sponsoring a team in the league, while supporting the community it represents. Other communities are also to benefit from JN Money’s involvement in the PFJL programme.

“If you look at JN’s mantra, ‘We’ll help you find a way’, one of the things that the league needed was competence, and we know we have the talent, so we will be working along with the league, as part of what is outlined in our sponsorship to have Owen come on as CEO of the PFJL,” Mr Hines pointed out.

Chairman of PFJL, Chris Williams, says that the signing agreement with JN Money is a historic one and provides the opportunity to build capacity.

“JN has stepped up to not just back professional football, but to back professional football with the most important aspect, competence- giving us the support to ensure that administration does not fail football and those of us [who] are close to the game know that administration is just as important as the skillset on the field. We are very grateful for the support that you have offered us,” he said.

The JN Money general manager noted that the JN Group has had a longstanding legacy in sports development at the national, community and international levels over several decades.

Among its legacy has been the development and funding of the JN Intercollegiate Relays in the 1980s through the 1990s; the JN Open Netball League; the JN Primary and All-Age Schools Cricket Competition; JN/JAAA Jamaica Invitational Meet, as well as the JN Knockout, which it established through the Jamaica Football Federation in the 1980s through to the 1990s. The tourney mimicked the English FA Cup.

“We have long been using sports as a tool to ‘build a society,’ and over the years we have developed various and integral partnerships, and we continue leverage those existing partnerships and develop others in order to establish benefits that will impact the sporting industry and our overall development for many decades to come,” Mr Hines emphasised.