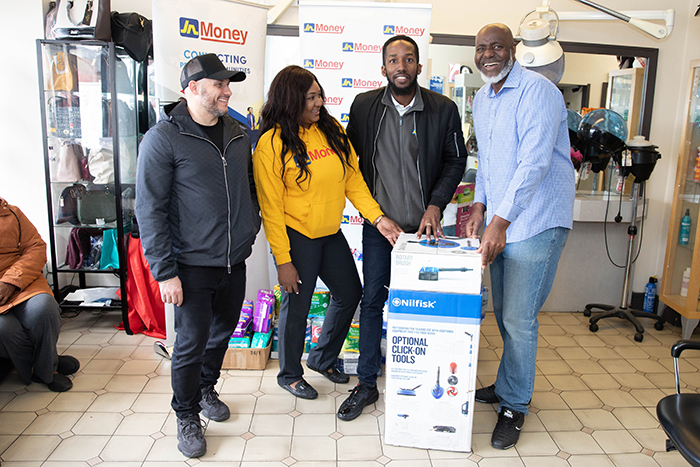 Osbourne Frank (right), owner of Kaffee & Kreme Hairdressing Salon in Coventry, England, holds a power hose with Kimona Wilson- Marketing Officer, JN Money UK, and Patrick Forrest- Digital Officer, JN Money UK while Harry Gregory, popularly known as White Yardie, looks on. All four were present at Mr. Frank’s salon for a JN Money UK donation to the St. Vincent relief efforts. JN Money UK donated food, other supplies and the power hose. Frank, a St. Vincentian, has been coordinating relief efforts for his home country since the eruption of the La Soufriere Volcano on the island on April 9. Gregory, has also been assisting with the relief efforts.

Osbourne Frank may now be a citizen of the United Kingdom, but his love for St Vincent and the Grenadines, the land of his birth, cannot be tamed.

The entrepreneur demonstrated his passion and commitment for his ‘Vincy’ countrymen when he started an initiative to assist the country’s recovery efforts following the eruption of the La Soufriere Volcano, on April 9.

The owner of both Caribbean Trade Limited, a food and beverage importation company, and the Kaffee & Kream hairdressing salon in Coventry, England, said he was led to assist because “it was the right thing to do.”

“Once I heard the volcano was going to erupt I became concerned,” said Mr. Frank. “I have family who lived in Georgetown, which is in the red zone and they needed to evacuate. When the call came to evacuate, I, and two of my cousins in the UK, opened our homes in St. Vincent in the green zone to shelter family and friends. With the generosity of monetary donations from family and friends in the UK and Europe, we have been able to support 55 people in the three homes.  There are 26 people, including children, in my home.”

Mr Frank, who has resided in England for more than 40 years, soon recognised that more needed to be done, to support the country’s recovery efforts.

“I realised that they also needed food and water apart from a place to stay. I contacted farmers on the island who I have a relationship with and was able to supply them with fresh fruits, vegetables, and fresh meat. I also contacted various local businesses, Vincyfresh for seasoning and marinades, St Vincent Bottlers for supplies of water and CK Greaves and Massey supermarkets for other essentials” he added.

The retired British Telecommunications employee also worked with his daughter, Fiona Quaynor, the St. Vincent and Grenadines Coventry Association Chair, and its members in the United Kingdom to garner more support.

“We went on local radio stations to appeal for support in the relief efforts. We received donations from persons in Coventry, Leamington, Leicester, Rugby and Birmingham. We also received clothes, food, toiletries, and other items that will assist persons on the island, many who have been displaced, such as a lot of our farmers who are currently in shelters,” he stated.

Mr Frank, who is an agent for JN Money UK, has also received support from the remittance company, which donated food and other supplies, as well as a power hose.

“I have been an agent for JN Money UK for the past 20 years and during that time, we have had a good partnership,” he stated. “Prior to our partnership, people in Coventry had to go to Birmingham to send funds to loved ones back home. Now, we have persons from Leicester, Rugby, Leamington, and even Birmingham, using our location to send funds.”

He was also grateful for the assistance from JN Money UK.

“On behalf of the people of St Vincent & The Grenadines, we would like to express our heartfelt appreciation for all the generous donations to the SVG Volcano Donation Appeal, at Kaffee & Kream Hairdressing in Coventry,” Mr Frank said.

“Ever since JN Money Ambassador and comedian, White Yardie visited, there has been an increase in donations from the public; and [it] was a testament that the Coventry community, retailers, and the wider public have been  touched and deeply affected by the natural disaster, which has unfolded,” he said.  “The food and other items went towards day-to-day survival, while the power hose assisted with their cleaning up efforts, especially in parts of the island where there was heavy ash deposits.”

All of the donations have been well-received by the Vincentians, said Zuleika Lewis of Empressive Farms, a St Vincent-based operation, which has been handling the distribution of the items from Mr Frank. 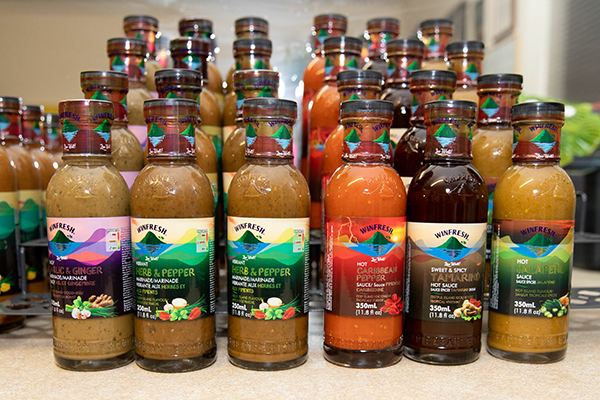 “Many persons were displaced from their homes on the island. Mr. Frank has been assisting them by purchasing fresh fruits, vegetables and other produce to provide for them. The farmers and their families, many being in shelters, need the economic support as they try to rebuild their lives. We appreciate him for his unwavering support and keeping our businesses going through this crisis,” explained Zuleika Lewis of Empressive Farms, a St. Vincent-based operation.

Horace Hines, general manager of JN Money Services, the parent company of JN Money UK, stated that the donations were in keeping with the remittance company’s thrust to keep families connected.

“As a money service operator, JN Money has remained committed to one of its missions of becoming a truly Caribbean entity by being the bridge that keeps families connected between the Diaspora and their homeland in several countries across the region. Although we no longer have a presence in St. Vincent, we stand by our Caribbean neighbours especially in their time of need. Over the years, we have provided assistance to countries such as Haiti, Dominica and a few others in times of natural disasters, and this initiative is part of our efforts to be a truly Caribbean brand,” Mr Hines added.